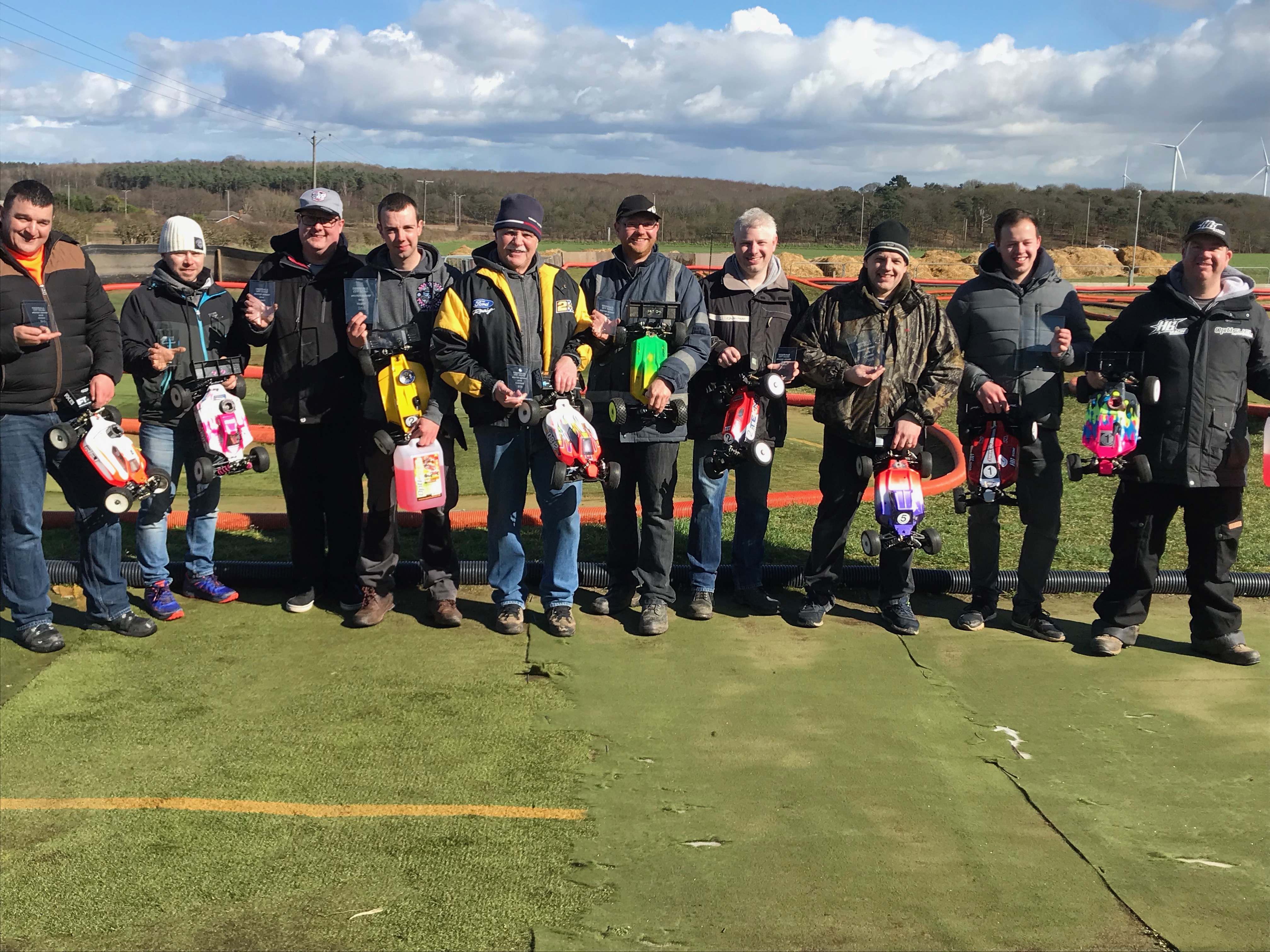 Well what can i say about the final round of the Deerdale Winter Series. The day started out with 15 drivers making the trip to us. 10 Nitro Buggy and 5 Electric Buggy.

The day started out with 30 minutes of open practice between 9am and 9:30am. The drivers were organised into two heats, One being a nitro buggy heat and the other an electric buggy heat.

Three rounds of qualifying started us off at around 10am. With the computer running its in usual automatic mode giving us all 8 minutes between each heat and 18 minutes between each round. So the meeting progressed at a steady pace. During the qualifying process we saw many different changed in the track conditions, especially during the third round where there was a really random light shower of rain pass over us, This made the track surface a little interesting to say the least.

However after we had finished qualifying we saw;

One Track Dave was second overall

and Adam Hall was third overall.

After the usual lunch break we started the two finals of the day. Nitro Buggy was out on track first for their 20 minute race

Some good driving was seen during the race and some interesting driving we shall say.

However after the 20 minute race we saw, Graham Alsop take the win with an impressive 29 laps, Adam Hall took second place and finially One Track Dave took third place. All these drivers raced their HotBodies Buggys. Meaning a HB top 3 lock out! 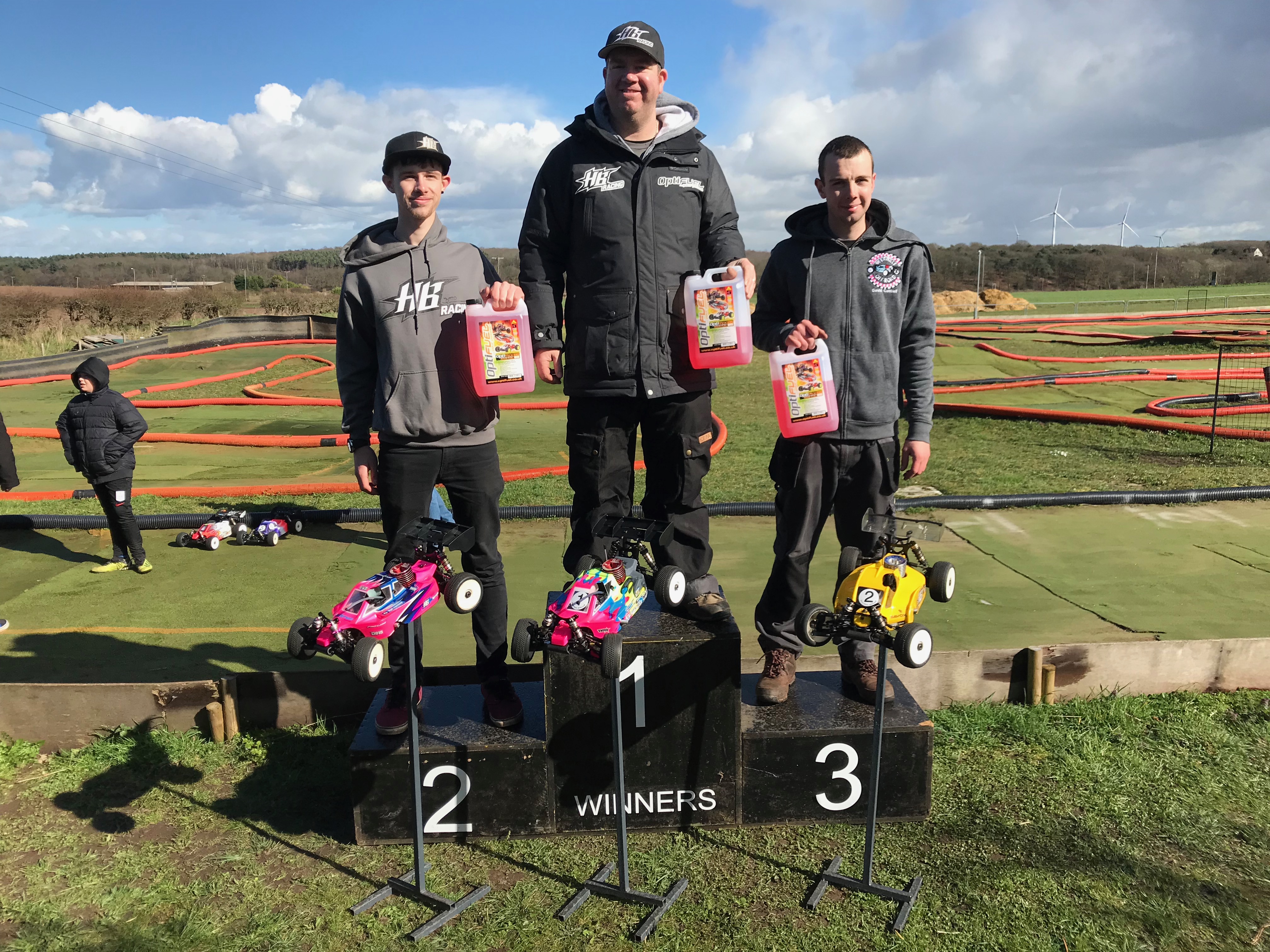 (Top 3 from the Buggy A Final)

After a short break we started the 18 minute E-Buggy final. This final consisted on 5 cars. After a very close start to this race and some fantastic battles during the race we saw all drivers finish in the same order that they started in. The finishing order was

I would like to say well done and thank you to all drivers who raced with us for the final round of the Deerdale Winter Series 2019. 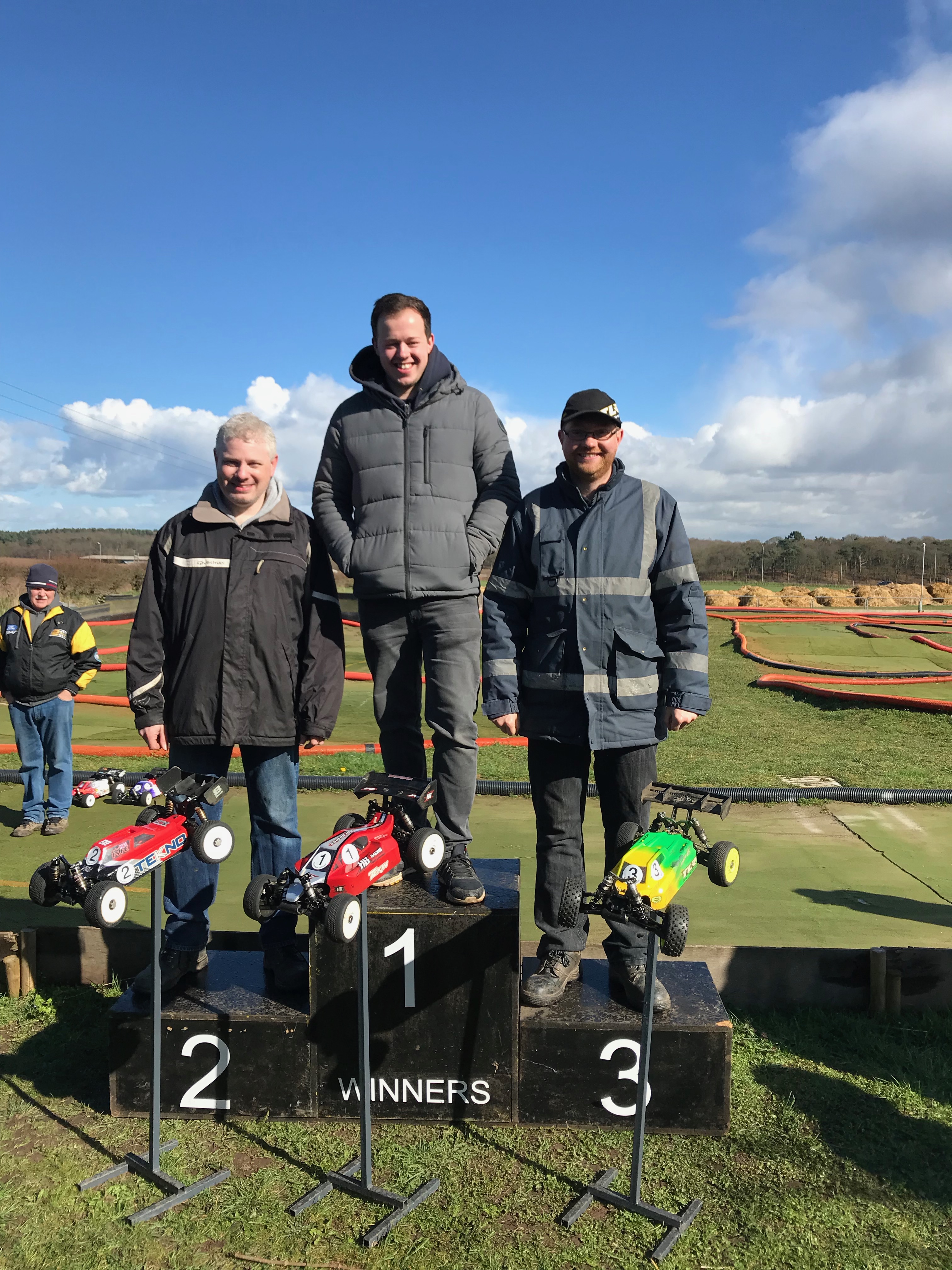 (Top 3 E-Buggy Drivers from the A Final)

For those that don't know, The Winter Series consisted of 5 rounds with the best 3 to count, starting in November and finishing in March. So what happened throughout the series?

Overall for the series

With the best 3 out of the 5 scores to count towards your championship score.

2nd place to 4th place all ended on the same points, So the ordered was sorted by using count back. These drivers all tied over 3 rounds, So the scores were done over 4 rounds, Chris Jeffery only did 3 rounds so that made him 4th. Paul Fyfe and Graham Stocks tied over 4 rounds so the points were decided over all 5 rounds. With Graham Stocks being the only one that had done all 5 rounds it gave him the 2nd spot and Paul Fyfe 3rd place.

I would like to take this opportunity to thank all drivers for racing with us during the Winter Series and supporting the club, I would like to thank those who helped out with marshalling at some of the meeting. These were mainly Partners/Wifes of the drivers so thank you so much for helping out.

Our next meeting is on the 7th April 2019 which is the start of the Summer Series. We will see you all soon!

We have 26 guests and no members online